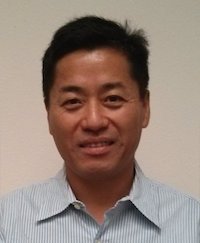 Rev. Justin Sim is a Korean-American who immigrated to America in sixth grade. He received his theological training from Washington Bible College and Dallas Theological Seminary. He grew up in church, served as a volunteer, became a ministry staff in 1992 and then a full-time pastor since his ordination in 1998. He has a burden for God’s people, especially Asian Americans. He enjoys spending time with the family, sports, and learning new things. He is married to Kim and has two children.